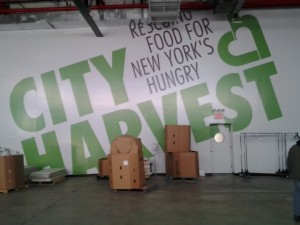 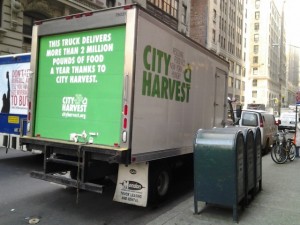 The truck I rode. This was in Manhattan.

Recently, New York was hit by Hurricane Sandy and City Harvest’s warehouse was hit by the storm as well. Their warehouse manager told me that their freezer equipment was damaged, and they had to store frozen items in containers for a while. But, they responded quickly to the disaster, and they have been distributing twice more of food than usual (250,000 pounds (!) per day compared to 125,000 pounds in the normal time) to the needy during the disaster relief time. 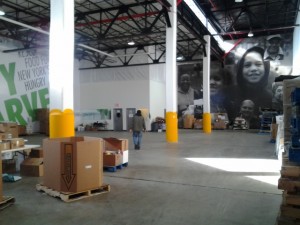 Their volunteer work space in the warehouse. Huge!

City Harvest receives foods from restaurants and grocery stores in New York, and also they receive foods through the Feeding America network and places like Hunt’s Point Food Distribution Center in South Bronx, which is one of the largest food distribution centers in the world.

City Harvest distributes foods to 600 programs in the city with 17 trucks and one trailer. Their operations seemed highly professional and focused on tracking and keeping good records of donations. Since many of their donations are relatively small amounts from a large number of donors like grocery store and restaurants, I thought their data management of food donations must be challenging. 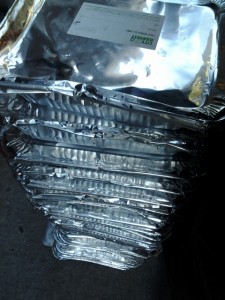 We picked up generous frozen pasta donations from one of their donors in Manhattan.

As I tagged along after the driver, I found he usually visits 17 or 18 places to pick up and delivers foods on a day. It was memorable he was very proud that City Harvest is very professional with record keeping and taking care of their vehicles. One of the donor restaurants was permanently closed, and the driver filled the driver feedback form to notify the staff in charge of making routes to remove the store from the route. I realized the importance of keeping records of even those small events instead of communicating orally so that there would not be misconceptions and also they can come back to the record later. 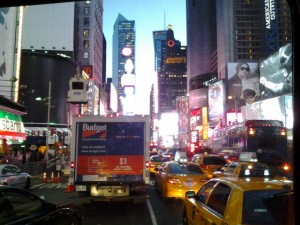 One of the big challenges in NY: Traffic. It took us five minutes to move a block.

Even though they were affected by the storm, their operations seemed getting back to normal. During the disaster, staff members from Gleaners Food Bank in Indianapolis and Greater Pittsburgh Food Bank came to help City Harvest for about a week. I was impressed that this kind of support was possible through the power of their network.

Food rescue programs are something we can apply in many Asian cities where they have many similarities to New York City such as many restaurants and stores and the existence of the poor in cities. But, securing refrigerated trucks and warehouses, heavy traffics in the cities would be challenging.

I would like to thank City Harvest for taking time for me to show me their warehouse and route.