Warning: Declaration of theme_navigation::update() should be compatible with WP_Widget::update($new_instance, $old_instance) in /home/q8rk9wphu912/domains/foodbank.asia/html/wp-content/plugins/child-page-navigation/child-page-navigation.php on line 0
 Our aid still continues in the disaster-hit area in the Philippines - Second Harvest Asia

Our local sister organization’s program manager Ryan Joson visited the disaster-hit areas in Cebu, the Philippines, three times so far: The first time in last December, the second in February, and the recent visit was in April. In his most recent trip, he went in the area to oversee the receipt of the donation of water from Second Harvest Japan. 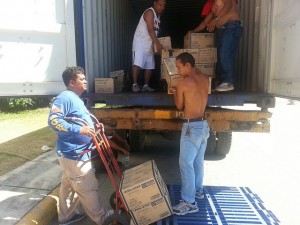 The water donations were shipped from Japan to the Cebu Provincial Government.

Ryan said, “We donated the two 40ft containers full of bottled waters from Japan to Cebu Provincial Government intended to be distributed to Typhoon Yolanda victims in Northern Cebu. The ID photo there (his photo was attached in Ryan’s report) is the person who assisted me in the release of the containers from Customs and he is the one who received these donations. Mr. Patrick is the one who heads this warehouse. The warehouse that the provincial government is the Cebu International Convention Center that was used in ASEAN Summit.”

The building Cebu International Convention Center. The building was damaged by the earthquake that hit Cebu and Bohol before the typhoon hit the area.

Inside the building, workers pile up the boxes of water. These will be distributed among the disaster victim in the area.

Second Harvest Japan is still planning to send more aid goods to the area. We thank all the people who made this possible.