Second Harvest Asia’s Yusuke Wada and Second Harvest Japan’s Rumi Ide visited the Philippines in Feb. 2013. They saw the operations of our local branch organization Salu-Salo Food Bank Philippines (FBP) and also received a training session of okra noodle making by the Department of Trade and Industry Tarlac (DTI Tarlac). Tarlac is the city from which FBP receives okra donations.

The excess okra is normally thrown away because the producer of okra exports the okra to Japan but the Japanese market standard is so high that a lot of okra gets rejected. We have been distributing fresh okra to NGOs in Manila since last October. Many of our partner NGOs received this nutritious food and served it to their clients such as children and their parents in the poor sections of Manila.
However, the challenge for us is how we can extend the shelf life of okra. Fresh okra is very nutritious, but its shelf life is not very long and also end users get tired of keep eating okra. So, in the last trip to Tarlac, the DTI Tarlac suggested that we make okra noodles with okra and flour. Therefore, this time we decided to have the training by the DTI Tarlac. Lyn Carlos of Tarlac State University kindly coordinated the training for us so that not only Second Harvest Asia but also students of Tarlac State University could receive the training. We would like to thank Lyn for her help. 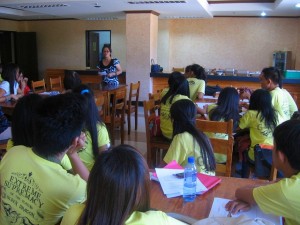 Lyn Carlos of Tarlac State University is giving an instruction before the training starts. 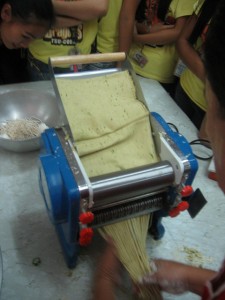 The instructor showed us how to make noodles with a noodle making machine. 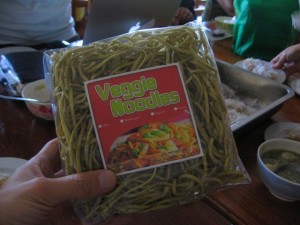 After you deep fry noodles, they package the noodle like this. Some groups try to sell this in markets. Selling noodles generates a source of income for NGOs.
By making okra noodles, we will be able to store the food for up to six months. Plus, noodle would be much easier for end users to eat frequently. We are excited to get this project going sometime soon.

At the same time, we are seeking other agricultural products as potential donations. The Philippines is producing many kinds of fresh produce such as banana, mango, and other vegetables. Second Harvest Asia will keep supporting FBP to acquire more food donations as a food bank.