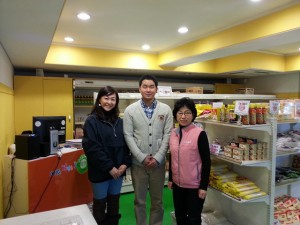 The Salvation Army Food Market
Youngsook volunteered at two food markets run by the Salvation Army. Food markets are places where individuals in need come to pick up items such as food and clothes as if they shop at a convenience store. In the Korean food bank system, food markets are similar to food pantries in other countries, but their clients “purchase” up to five items including non-food items per month. They are trying to create the atmosphere that clients are having same experiences as usual shopping so that they do not feel stigmatized. Youngsook says, “it was totally same as shopping at a local convenience store except that you don’t need to pay for what they picked.” One of the markets, Mapo Happiness Sharing Food Market, has a cafe, a recycle shop, and a continuing education school inside of the building. Those additional shops and school are open to the public, and it is a community place where people can mingle with each other. Youngsook says, “The coffee they serve was delicious!” 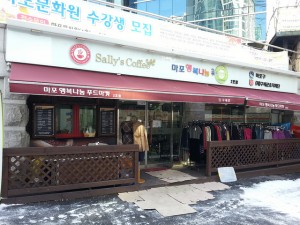 The Salvation Army’s food market. You can see the cafe on the left. 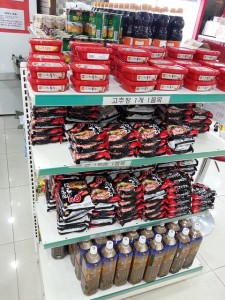 Food items at a food market. Clients can pick what they want up to five items per month.
Seodaemun-gu Wholehearted Food Market
At the next food market, Seodaemun-gu Wholehearted Food Market, Youngsook volunteered to repack food into bags while talked to the staff. In Korea, food banking is a public policy of the national government. If you need to receive food from a food bank, you need to register at a local city office. The information of the registrants is sent to a local food bank or food market in each municipality. Seodaemun-gu Wholehearted Food Market also receives clients’ information from the local city office. The food market covers a large population and has 1,700 clients while many food markets typically have 600 to 700 clients.
The Central Food Bank of Korea
Youngsook then visited the Central Food Bank located in the Korean Social Welfare Council’s building. The Central Food Bank governs the food banks across the country and plays an important role in developing food banking and charitable giving in the country. Korea’s Food Donation Act encourages people and companies to donate food to food banks and food markets. But still creating a giving culture in the country is a big challenge for them. Korea started food banking around the same time Japan did. But the progress they made in Korea is much bigger than that of Japan. Food banks in Japan are so eager to learn about food banking in Korea that Youngsook was invited to speak about the Korean food bank system at events in Japan. 2HJ hopes that our research project about Korea will help boost food banking in Japan.