Second Harvest Asia visited South Korea on September 7, 2012 to celebrate the 60thanniversary of the founding of the Korea National Council on Social Welfare (SSN). This organization was established in 1952 to care for orphans from the Korean War. Since its inception it has been tasked with supporting the policies of the government while remaining independent and over the years various laws have been passed to codify support for this organization as well as provide it with financial support to carry out its mandate. 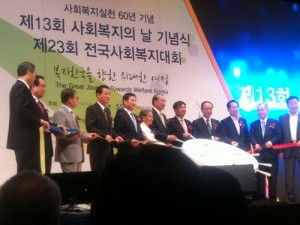 Hong Kong, Taiwan, and Japan sent representatives from their own Council of Social Welfare to this event. President Dr. Chan of The Council of Social Welfare, Taiwan, expressed interest in food banking and may send representatives to the regional meeting Second Harvest Asia is holding on October 15 and 16. Chief Executive Christine Fang of The Hong Kong Council of Social Services said that food banking had become a hot topic in recent years. As a co-sponsor of our regional meeting she said her organization is looking forward to hearing how other food banks approach their work and learning new ideas. 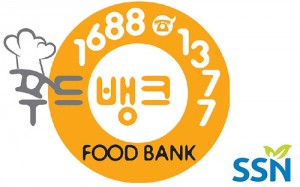 The role of SSN and food banking in Korea is an interesting one and probably accounts more than anything for the success of food banking in the country. SSN started food banking in South Korea in January, 1998 in response to the IMF crisis. They began a pilot project in four areas (Seoul, Busan, Daegu, and Gwacheon) for two years. In May 2000, the Ministry of Health realized the necessity for a central organization that can provide a network for local food banks and established the current system.
This was our third visit to the country in the last six months. Our first two visits were focused on researching and learning how food banking operates. We were very surprised to find a system far ahead of any other food bank in the region in terms of the number of people they reach each day, the number of professionals they employ, and its efficiency and sustainability.
With this in mind we have launched a six-month project with Food Bank Korea to strengthen relations between the food banks in South Korea and Second Harvest Japan. The purpose will be to gain a deeper understanding of the role food banking in South Korean society, how they operate at both a local and national level, and find best practices to share with Japan. At the end of this project a symposium will be held in both Korea and Japan to share the results. This is a great opportunity to use food banking to strengthen the ties between these two countries.
We have hired Youngsook Lee, a third-generation Korean living in Japan, to head up this project. She comes highly qualified as she is a former professor at Meiji Gakuen who part of her responsibilities were to help connect students with community projects. One such project was volunteering at food banks in Japan and the US. In addition, she is trilingual and has a deep understanding of both Korean and Japanese cultures. We are very lucky to have her on our team.
Charles E. McJilton
Chair – Second Harvest Asia