Second Harvest Asia (2HA) Chair Charles McJilton has been in Manila since Nov. 13, and he reported about what he saw and heard when he talked to Philippine Red Cross and Department of Social Welfare and Development (DSWD). 2HA is planning to send food and water from outside the country to the affected through the two agencies, and we will take action based on the information we collect in the Philippines. 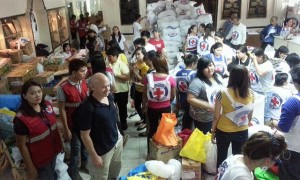 Field Report Chronology
Nov. 14 a.m.: Visited DSWD’s NROC (National Resource Operations Center) near Manila International Airport. DSWD gave the green light for donations and instructions on where they can be sent.
This is a list of items they believe they will need
Tarps     Tents     Mats      Sleeping bags    Personal hygiene kits     Mosquito nets  Cooking utensils         Cups and dishes       Water           Ready-to-eat food
At NROC met representative from International Rescue Committee. This is their first time to operate in the Philippines and they plan to bring in sanitation equipment.
Also at NROC met the representative for the Philippine Air Force. Asked for a seat on the next C-130 heading to Tacloban, but President put out an order saying only DSWD people allowed to fly. Asked us to check with the US Marines.
NROC is the main clearing center for donations and packing of care sacks for households. Each care sack is estimated to last 72 hours and feed a family of four. The contents are as follows:
6kg rice                 4 tins of sardines              4 tins of canned beef
8 packets of instant noodles             8 sachets of coffee
These care sacks are then put in larger sacks of four to six families. Four-family sacks can weigh 30kg and six-family weigh more than 40kg. They put a peso value on these larger sacks and I saw P342.19 written on the four-family sack. When we helped move these sacks I estimated there must have been 5k – 8k sacks mixed together in a large mountain. Our work was separating the four-family and six-family sacks and putting them on pallets.
In spite of being a “national operations center” they only had one pallet-jack to move pallets and one forklift to put loaded pallets on trucks. This created a huge logjam in getting loaded pallets moved onto trucks.
At NROC there were approximately 200 ~ 300 volunteers. Almost all were in some kind of group such as Bureau of Fire Protection (fire dept.), Coast Guard, and many schools and companies. There were far more volunteers than actual work to be done.
At a nearby location another packaging line was to be created. However, at 11:00 there were at least 200 volunteers, rice, and sardines but no plastic bags to bag rice or other items for the care sacks. Cris estimated that the line would not begin packaging until after 15:00.
Nov. 14 p.m.: We visited Philippine Red Cross headquarters. Their first floor was filled with volunteers making their own packages similar to DSWD.
•        1-2 Day Kit
5kg rice 4 tins canned goods 4 packs of noodles Assorted biscuits
•        6-8 Day Kit
10kg rice 10 tins of canned goods (2 meatloaf, 2 corned beef, 6 sardines) 7 packs of noodles or 2kg monggo beans 1kg salt 1kg sugar 1ltr vegetable oil
Red Cross showed interest in in-kind donations, but said cash was always welcome. This is the list of items they believe they will need:
Personal hygiene kits     Kitchen start-up kits       Shelter kits         Tents     Water   Ready-to-eat food
Media:
Analysis:
Actions