Second Harvest Asia and Second Harvest Japan held the first Japan-Korea food bank forum on May 14, 2013 in Tokyo. Dr. Moo Sung Chung, the chair of the national food bank evaluation committee of Korea, and Rev. Hanseung Kim, the founder of Anglican Food Bank of Korea, gave presentations about food banking in Korea in the first half of the event, and in the second half, Japanese panels joined the Korean speakers and discussed the challenges and possibilities of food banking in the both countries.

Korea’s food bank system has been the biggest one in Asia largely because of the strong government initiative right after the IMF crisis in 1998. But at the same time, there also have been efforts among the civil sector to operate food banks in the country. Dr. Chung, as the chair of the national food bank evaluation committee, explained about the history and challenges of the national food bank system as well as its scale (425 food banks across the country) and their effort to provide thorough evaluation of the system for the first time in its history. Rev. Kim explained about their extensive program as a non-government-funded food bank as well as his creative approaches of fundraising.

The event was very educational to the attendees who wanted to learn about the government-initiated system in Korea in that the Korean speakers were frank about the challenges of the system as well as its merits.

Many attendees expressed strong agreement through the questionnaire about Rev. Kim’s remark “I always think about the balance between helping people and considering clients’ self-respects.”

Dr. Kim said the Korean government is actively seeking practices outside Korea and this kind of learning opportunity was beneficial to Korean food bankers as well. 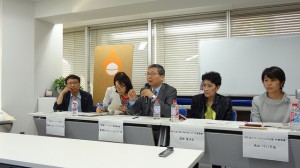 Dr. Chung answers a question from the audience. 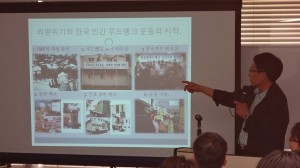 Rev. Kim explains about his organization’s operations. Rev. Kim’s food bank does not receive any government funding, and yet they raise great support from the public. They also run a restaurant in Seoul to raise fund for the food bank. 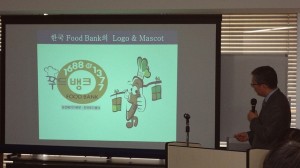 Dr. Chung explains about the logo and mascot. People in need can call the number on the logo to learn about the food bank services available to them.

After the event, we heard, from both the Korean guests and Japanese attendants, great interests in learning more about each other’s food bank system and in having more opportunities like this event in the future. Second Harvest Asia will strengthen the momentum and develop the platform to share knowledge among food banks in Asia.